The hospitality show house at EverBank Field that Jacksonville Jaguars fans toured for two football seasons has been moved to Springfield, where it will become the home for a soldier and his family.

U.S. Army Sgt. AB Shirley, a Jacksonville native who earned a Purple Heart for his service in Afghanistan, received the two-story home through Dream Finders Homes and the Military Warriors Support Foundation.

Dream Finders Homes had originally planned to move the house July 23, but the move was postponed to mid-August because of logistical issues, said Jenn Kjellman, the company’s marketing manager.

The 2,500-square-foot home was built to be taken apart in three pieces. The company will soon put the house back together, build a new roof and complete the finishing touches, Kjellman said.

The move-in date for the Shirley family has not been determined, she said.

After being presented the home during the Jacksonville Jaguars game against the Tennessee Titans on Christmas Eve, Shirley said he couldn’t describe his elation.

Shirley retired to Clarksville, Tennessee, with his wife and son after recovering from injuries in a bomb blast in Afghanistan.  He was severely wounded in October 2011 when a 500-pound IED exploded under his vehicle. He sustained a traumatic brain injury and other injuries.

Wanting to return to his hometown where he has family, Shirley was one of nearly 80 veterans who applied for the home.

Dream Finders Homes worked with the Military Warriors Support Foundation, a nonprofit that awards mortgage-free homes to soldiers injured in combat through its Homes4WoundedHeroes program. Purple Heart recipients are given priority.

Military Warriors Support Foundation vetted the applicants, looking for a family that would succeed and be able to sustain the home. Dream Finders Homes was given a list of the top three candidates and worked with the Jaguars and the city to choose the recipient based on the best fit, family size and geographic roots.

“What better than to put someone in the house who was from Jacksonville,” Kjellman said. “We just felt it would bring the story full circle.”

Dream Finders Homes built the house outside Gate 4 at EverBank Field for the 2015 and 2016 Jaguars football seasons.

The home has four bedrooms, 2 ½ bathrooms, a home theater and covered porches on both levels. It’s fully furnished by Ashley Furniture.

The home, including the furniture and Jaguar-influenced interior décor, is valued about $600,000, Kjellman said.

The hospitality house was a first-of-its kind marketing strategy that has paid off, Kjellman said.

“It has definitely been a great branding tactic for us,” she said. “People know us now. They’ll say, ‘You’re the people who have the house at the stadium’. ”

About 1,500 people toured the house during each Jaguars home game in 2015, Kjellman said. Because of the construction of Daily’s Place amphitheater, visitors dropped to about 500-600 a game during the 2016 season. The home also was a host site for the “Helmets and Heels” radio program on 92.5 FM and 1010XL.

In July, Dream Finders Homes received a permit to build its next stadium home for the Jaguars’ 2017 season. It will have a modern style with two stories, three bedrooms and three bathrooms.

“It will be very different than anything we’ve done before,” Kjellman said.

Dream Finders Homes is a private, national home builder that has constructed homes at the Bluffs on Plummers Cove and Caney Branch Villas in Jacksonville, the Atlantic Beach Country Club, and Cedar Point in St. Johns County. 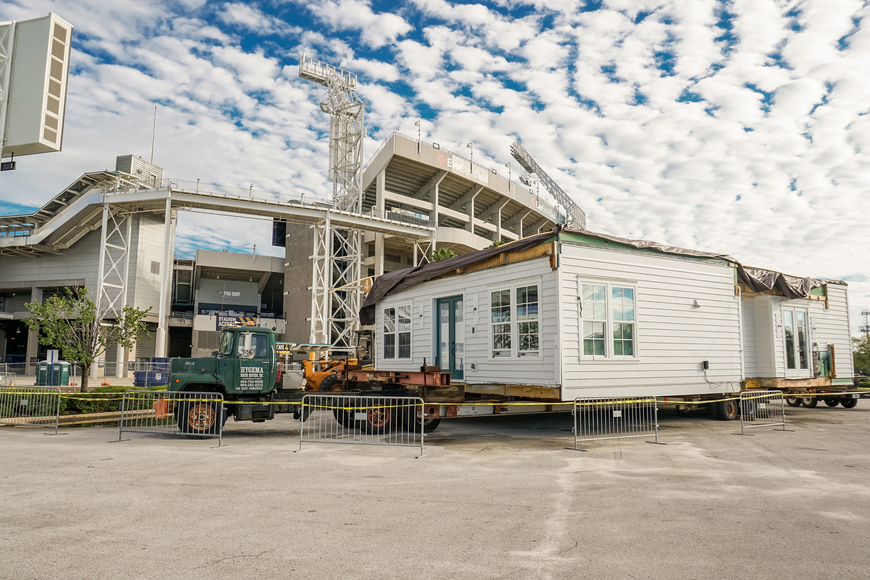